Border collie is an extremely intelligent sheep-dog with every advantages and drawbacks of this kind. It is an ideal partner if you regard it as a family member or friend; if you can spend some time with it every day; if you can satisfy its physical as well as its mental needs. Nor 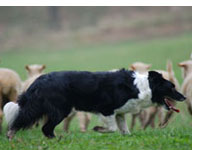 mal daily walks are not enough, this dog needs more dressage, joint games and other programs and he needs all these regularly. There are several sport activities you can choose from for a border collie like herding, agility, flyball or rescuing, but these are just a few from the fascinating activities which are available. However, those who cannot guarantee a regular care may turn to be disappointed, as if there is nothing that keeps a border collie busy, it will certainly start to keep itself so. In fact, it is quite ingenious when it comes to attracting attention: it chews everything which is at mouth, digs in the garden, steals food from the table and ruins all the stuff left anywhere where it goes about loose. It is important to notice that this is not wickedness from its part, to tell the truth, it cannot bare being idle. If you and your family do not prepare to spend a lot of time and energy on the new member, if you does not regard your dog as your single hobby, then a border collie will not bring so much happiness. If you are only searching for a nice partner to be with, then border collie is certainly not a dog for you. We can say that 'having been border collied' is a lifestyle, of course one of a special and beautiful kind. To be honest, it is not worth rendering your and your dog's life more difficult with an unfortunate choice of breed. In the picture you can see the 11 years old world champion in action: Jephanil Kamella Chelsie, the first border collie in Hungary herding.

GENERAL APPEARANCE: Well proportioned, smooth outline showing quality, gracefulness and perfect balance, combined with sufficient substance to give impression of endurance. Any tendency to courseness or weediness undesirable.
CHARACTERISTICS: Tenacious, hardworking sheepdog, of great tractability.
TEMPERAMENT: Keen, alert, responsive and intelligent. Neither nervous nor aggressive.
HEAD & SKULL: Skull fairly broad, occiput not pronounced. Cheeks not full or rounded. Muzzle, tapering to nose, moderately short and strong. Skull and foreface approximately equal in length. Stop very distinct. Nose black, except in brown or chocolate colour when it may be brown. In blues nose should be slate colour. Nostrils well developed.
EYES: Set wide apart, oval shaped, of moderate size, brown in colour except in merles where one or both or part of one or both may be blue. Expression mild, keen, alert and intelligent.
EARS: Medium sized and texture, well set apart. Carried erect or semi-erect and sensitive in use.
MOUTH: Teeth and jaws strong with a perfect, regular and complete scissor bite, i.e. upper teeth closely overlapping lower teeth and set square to the jaws.
NECK: Of good length, strong and muscular, slightly arched and broadening to shoulders.
FOREQUARTERS: Front legs parallel when viewed from front, pasterns slightly sloping when viewed from side. Bone strong, but not heavy. Shoulders well laid back, elbows close to body.
BODY: Athletic in apperance, ribs well sprung, chest deep and rather broad, loins deep and muscular, but not tucked up. Body slightly longer than height at shoulder.
HINDQUARTERS: Broad, muscular, in profile sloping gracefully to set on of tail. Thighs long, deep and muscular with well turned stifles and strong, well let down hocks. From hock to ground, hindlegs well boned and parallel when viewed from rear.
FEET: Oval in shape, pads deep, strong and sound, toes arched and close together. Nails short and strong.
TAIL: Moderately long, the bone reaching at least to hock, set on low, well furnished and with an upward swirl towards the end, completing graceful contour and balance of dog. Tail may be raised in excitement, never carried over back.
GAIT/MOVEMENT: Free, smooth and tireless, with minimum lift of feet, conveying impression of ability to move with great stealth and speed.
COAT: Two varieties: 1) Moderately long. 2) Smooth. In both, topcoat dense and medium textured, undercoat soft and dense giving good weather resistance. In moderately long coated variety, abundant coat forms mane, breeching and brush. On face, ears, forelegs (except for feather), hindlegs from hock to ground, hair should be short and smooth.
COLOUR: Variety of colours permissable. White should never predominate.
SIZE: Ideal height: Dogs 53cms (21ins); Bitches slightly less.
FAULTS: Any departure from the foregoing points should be considered a fault and the seriousness with which the fault should be regarded be in exact proportion to its degree.
NOTE: Male animals should have two apparently normal testicles fully descended into the scrotum.

More informations about the colours of the border collie

Informations about the hereditaly disease TNS

There is a lot of dispute about the origin of the name Border Collie. Maybe the origin of the word Collie lies in the word 'Coal'; 'colley' or 'coly' in the English language is related to the colour black, or Collie is a Gaelic word with the meaning 'useful'. Some stories stating that the Border Collie was named after the sheep breed the dogs worked, cannot be confirmed. Nowhere a sheep breed with the name 'colley' or 'coally' can be found.
Another theory takes it yet one step further and relates the word 'collie' to the German 'Kuli'. 'Kuli' is pronounced the same way as the English 'coollie' which means 'worker'. The fact that there is indeed a breed called 'Alt Deutscher Kuli' which works with sheep, makes the story complete. This word 'Kuli' is supposedly coming from 'collaborare' (to collaborate) in Latin. At the time of the Roman occupation, the Gaelic provinces bordered at the Rhine in Germany.
The word Border can be attributed to James Reid—secretary of the International Sheepdog Society (ISDS) from 1915 till 1948. In 1918 he described the winner of the Supreme Championship as Border Collie. It took till 1946 before he mentioned the name Border Collie on the ISDS registration papers. Compared to the long period of time shepherds use dogs for working at the farm, the Border Collie as we know him is quite young. In the nineteenth century we can find several publications in which dogs with the description 'Collie' or 'Colley' are mentioned. Illustrations dating from this time show a varying exterior. Sometimes the dogs look more like the current Scottish shepherd, in other cases they look like the Border Collie, and sometimes it is impossible to recognise a current breed. At the end of the nineteenth century, you can find a type of 'Colley' that resembles the current Border Collie a lot.

With the birth of the legendary Old Hemp in 1893 and Old Kep in 1901, the current Border Collie type has emerged

This dog (born in 1893) served as the model for the Border Collie exterior. His big influence on the breed was caused by his sensational appearance at trials. Since he started trials at the age of one, he never lost one. Old Hemp had a formidable ability to read sheep, and finished every course apparently without any difficulty. The reticent Scots apparently described him as 'bluidy marvellous'.
Actually, it was quite surprising that Old Hemp was this talented. His father—Roy—was a nice dog, but did not posses special talent for herding sheep. His mother—Meg—on the contrary was such an intense worker that she hypnotised herself instead of the sheep. Thus Old Hemp was a typical example of a dog inheriting all the good characteristics of its parents without being burdened by their bad habits.
During the eight years of his life, Old Hemp was a very popular stud dog, supposedly he fathered more than 200 dogs and an unknown number of bitches. A scary high number of offspring, and thus most current Border Collies are somehow descendants of Old Hemp. A factor adding to the success of Old Hemp as stud dog is the fact he passed on his characteristics to his offspring very well. Many of them became successful trial dogs.

y. One of his contributions to the breed was his kind nature. While the first Borders were a little averse of strangers, Old Kep was the kindest dog. The genes of Old Kep ended up in the breed through amongst others Herdman's Tommy (ISDS 16), a grandson of Old Hemp. Don (ISDS 11)—a son of Old Kep—was exported to New Zealand where he contributed greatly to the Australian Border Collies. Another contribution of Old Kep to the breed was his 'eye'. His ability to control the sheep with his look resulted in 45 first places at trials.

From the lines of J.M. Wilson's Cap, a tri-colour dog was born in 1963 which would become the most often used dog in the history of the Border

Collie. Wiston Cap (ISDS 31154) won the International in 1965. Until his death in 1979, he fathered countless pups. Many of the champions in the seventies and eighties were children of Wiston Cap. Since Wiston Cap was such a valued stud dog, most current BC's are somehow his descendants. Because of this concentration of genes, many recessive characteristics came forward. Amongst them some sought after, like colour factors, but also unwanted, like bad character and diseases like epilepsy, CEA. Furthermore, Wiston Cap contributed to the large number of Border Collies with prick ears. Noticeable here is the fact that all champions he produced were real out-crosses with dogs not related to his ancestors.